Azcona crowned King of the Weekend in Vallelunga 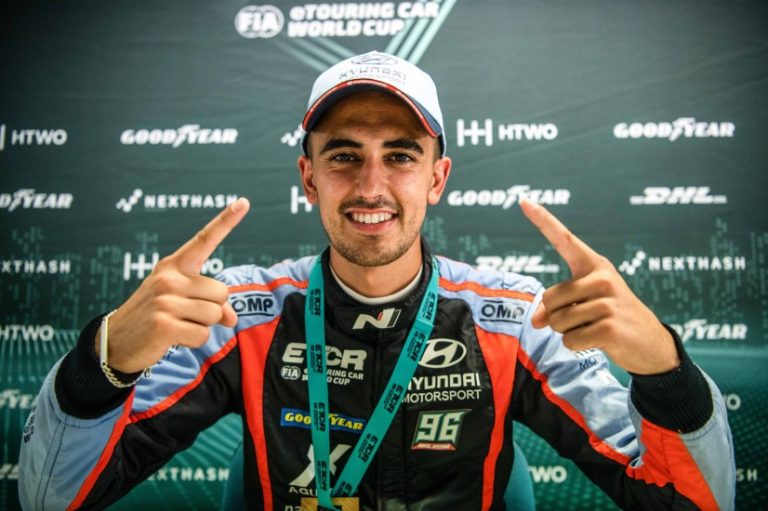 Mikel Azcona has been crowned King of the Weekend after an extraordinary fifth round of the FIA ETCR eTouring Car World Cup, Race IT, at Autodromo Vallelunga Piero Taruffi with continuing searing hot temperatures giving all competitors a stern test in the glorious Regione Lazio.

Azcona took his first King of the Weekend win as his Hyundai Motorsport N squad were victorious for their first weekend too as they overtook Romeo Ferraris in the standings after a weekend which promised much for the local squad but ultimately delivered a very different weekend than that expected.

Azcona scored the perfect weekend 100 point tally, but he was put under pressure in his Pool FAST DHL Super Final as Romeo Ferraris driver Bruno Spengler pressured him hard alongside down into T1. Azcona ultmately prevailed on that lap and Spengler would subsequently spin out of the race in spectacular fashion, ending his day with a visit to a local hospital for precautionary checks. His Giulia ETCR needed only a brief evaluation to rule it out of further action for the weekend, meaning Maxime Martin’s hitherto perfect points run in Pool FURIOUS could not continue in that DHL Super Final and the squad also opted not to run Giovanni Venturini either.

The depleted field meant a sparse final Final of the day, with Nicky Catsburg looking to continue Hyundai Motorsport’s fine run until his tyre gave up its battle with a handful of corners left to go, gifting the win to CUPRA’s Mattias Ekström.

Leaving Vallelunga, CUPRA EKS continue to lead the Manufacturers’ standings with 876 points to Hyundai Motorsport N’s 629, whilst Adrien Tambay leads the drivers with 435 points from Ekström on 421 and Azcona on 368.

Mikel Azcona, Hyundai Motorsport N
This is an incredible feeling. I have wanted to achieve this result with Hyundai Motorsport for a long time this season, and we have done it here in Vallelunga – the place where I took my first King of the Weekend crown. It is a very positive moment, we have made a good improvement as a team and maximised everything from the car. I think we have plenty of opportunities ahead of us in the next events to fight for this result again. Thank you to my team for working so hard every single day – what an amazing weekend.

King of the Weekend results from Race IT

News, quotes and updates from Sunday in Race IT

Azcona and Tambay take the FAST Semi Final spoils
Mikel Azcona and Adrien Tambay took the wins in the Pool FAST Semi Finals on the Sunday morning of Race IT, the fifth round of the FIA ETCR eTouring Car World Cup at Vallelunga.