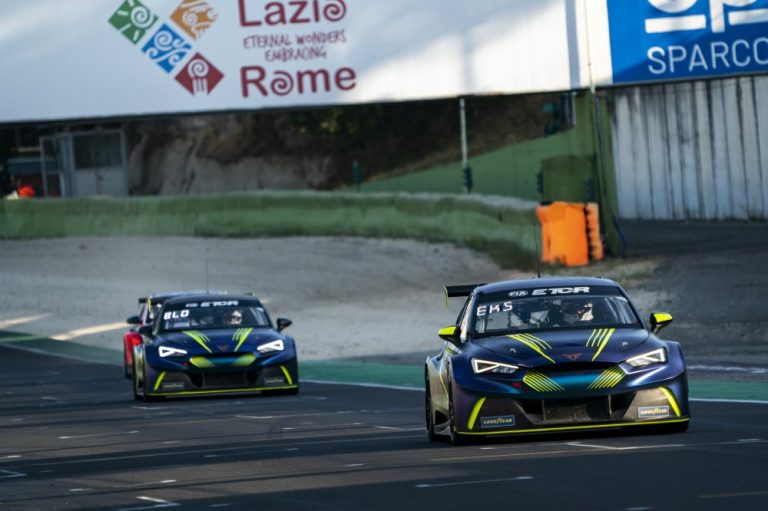 Pool FURIOUS presented a very different DHL Super Final than expected to end the fifth round of the FIA ETCR eTouring Car World Cup, Race IT, in Vallelunga with what looked like being a certain win for Hyundai Motorsport N driver Nicky Catsburg turning into a victory for CUPRA EKS driver Mattias Ekström.

It was already a very different and depleted grid after Romeo Ferraris withdrew their cars following Bruno Spengler’s earlier accident in the earlier Pool FAST DHL Super Final meaning Maxime Martin was unable to continue his fine run of form from pole position and Giovanni Venturini would not have the chance to put in a fine performance to end his weekend either.

At the off from the space-out grid Catsburg made a fine start down to T1, with Ekström unchallenged by Blomqvist alongside. As the leading CUPRA tried to chase down the rapidly disappearing Catsburg so the second CUPRA soon had a very feisty Vernay in the second Hyundai Motorsport Veloster to contend with.

With six laps and only 40 seconds of Power Up to use, so deployment tactics were a factor, with Vernay at the fore of the early adopters and a more balanced approach from those ahead. Catsburg was able to stretch a lead and as the laps ticked by it looked like it would be an easy win for the Hyundai Motosport season part-timer.

Don’t speak too soon. The four cars ended the penultimate lap Catsburg – Ekström – Blomqvist – Vernay, but that would change near the end of the final lap when, with almost a two-second lead, Catsburg suffered an extreme rear left delamination, dropping him from first to last and gifting the win to Ekström, with Blomqvist and Vernay right behind across the line.

Mattias Ekström CUPRA EKS
In end to finish P2 in the King of the Weekend after such an eventful weekend was a bit of a surprise. We were struggling a little bit this week with pace and we didn’t have a smooth one but in the end thanks to a good team effort and also thanks to good teamwork with Tom we were able to score P2 and P3 which I think was a good result.

Tom Blomqvist CUPRA EKS
It was a smart race. We saw this weekend was a challenge for everyone with the tyres. We knew that coming into the race and we had to, we just basically tried to manage not pushing too much not putting too much demand on the tyres and tried to stay off the curbs. So just being sensible gave us a place on the podium for myself and Mattias today.

Jean-Karl Vernay Hyundai Motorsport N
Really happy for the team and Mikel. We had really good pace all weekend which was really satisfying. Overall it was a challenging weekend for me. When you have a difficult Qualifying it is quite difficult at this circuit as there are not many opportunities to overtake. My start in the final race was good, pace was there but to make the most of it you have to start at the front.

Nicky Catsburg Hyundai Motorsport N
Super unfortunate, I was leading quite comfortably and everything was going to plan. We saw a lot of punctures during the day so my plan was not to use any heavy kerbs, and it worked really well. I was staying off them and managing the pace while maintaining the gap. Unfortunately with three corners to go in turn 10, it happened to me. The tyre went and I tried to make it but it was too much. I would have loved to win, I could have been second in the King of the Weekend standings which would have been nice. A blemish on an otherwise positive weekend.