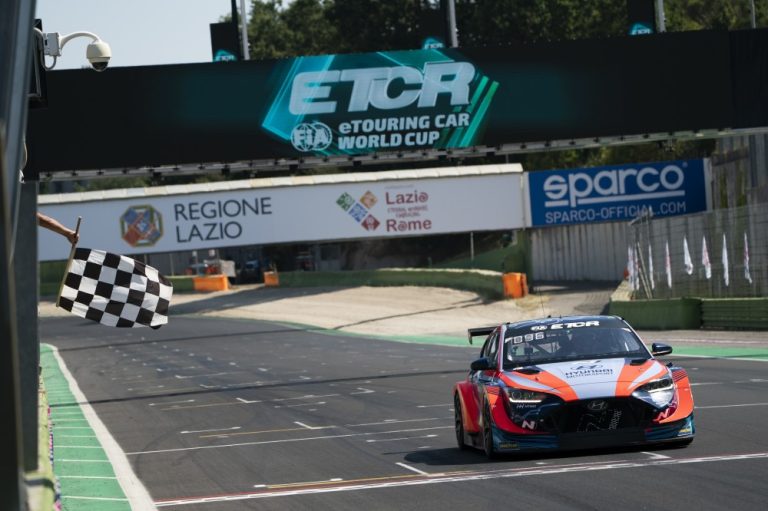 Mikel Azcona maintained his perfect weekend with a faultless performance for Hyundai Motorsport N in the Pool Fast DHL Super Final at Race IT, the fifth round of the FIA ETCR eTouring Car World Cup at Vallelunga.

Whilst the winner’s race was predominantly straightforward, that was far from the case elsewhere with a drama and incident heavy six laps in the heat of the Italian circuit in Regione Lazio.

Azcona made a clean start but it was clear that Bruno Spengler in the Romeo Ferraris had strong intentions for the lead as he pressured the Veloster driver down to T1 with plenty of contact between the two. 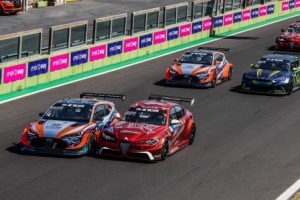 Azcona was robust in defence and emerged in the lead, whilst behind Michelisz kept third position in the second Hyundai Motorsport car, with Tambay fourth in the CUPRA EKS for but a moment, before Filippi in the second Romeo Ferraris Giulia ETCR tried a brave move around the outside on both cars ahead of him, which only served to leave him vulnerable to attack from Gené in the second CUPRA.

The order was thus settled for the second part of the first lap as tactical considerations came to the fore after the wheel-to-wheel intuition of the first turns.

First to show their hands were seemingly the two CUPRAs, closing up to Michelisz ahead on the second lap whilst dropping Filippi behind. By lap three, Tambay was also dropping his team-mate as he lined-up Michelisz in his sights, but those sights were soon dust-filled as Spengler had a big moment between T2 and T3 with a semi-airborne spin through the gravel finally arrested by the tyre wall. Local yellows were soon out, and Spengler would require a visit to the medical centre and subsequent precautionary checks at the local hospital.

Whilst Spengler remained in his car, so the race continued elsewhere on track and there was more drama come the penultimate lap as Michelisz once more straight-lined the chicane just as he had in the earlier Semi Final, with a delaminating tyre on the rear left of his Veloster.

With The second Hyundai now limping around, Tambay found himself elevated to second place, albeit a country-mile behind Azcona with Gené and Filippi following behind. But that wasn’t all. Early in the final lap, Filippi’s rear left also shred its tread, meaning two cars to limp home as the podium three completed their lap at race pace.

Not an easy race! It was very tough, especially the start – honestly I didn’t understand what Bruno was doing pushing me on the outside into the gravel in the first metres. You need to be fair and respect the drivers, which I felt he didn’t do but the car was very good from the first corner to the chequered flag. I was able to push with new tyres, the car was perfect, and I was able to make a difference very quickly and build a one second gap. I was able to push and concentrate until the end. When I saw him going into the gravel, and then Norbi a lap later, I tried to take it easy because I didn’t want to throw the race away.

Adrien Tambay, CUPRA EKS
Again a very great turnaround for me this weekend finishing second in the in that Super Final. Okay, it’s not a win like we did in the first four Super Finals, but still a very good points finish. I kind of smelt that the tyre punctures were close and we had the same temperature as yesterday when I had one. I preferred to take it very easy from the beginning and this is what happened to the others. Sometimes you know building a championship is about being clever and today we were we were on this side. So now we will look forward to attack again in the next round.

Jordi Gené, CUPRA EKS
Well happy after a bit of bad luck in qualifying and in the Semi Final. In the  DHL Super Final this bad luck we had in the beginning turned  into our favour, so I’m happy. I’m also happy because I had good pace all weekend. In qualifying my lap was 1/10 from from third position, which is means I was fast. In the Final I was also quite fast as I could follow well the group in front but I could not attack the guy I had just in front of me because he’s my team-mate and I had to protect him!  But on the stand I managed to fight well with Filippi, overtake him, catch them up in front and be with them, so happy with my base happy with the result we had in CUPRA on that Super Final so all in all, let’s say it’s a good way to go on holidays.

Norbert Michelisz, Hyundai Motorsport N
That would have been probably my best finish of the season. The car felt great so it’s a shame. This year I have a bit of a feeling that things are not really coming my way, but I’ve had good periods followed by bad periods, and then it goes the other way again. While this is a bit more difficult at the moment, I’m confident better things are ahead of me.