Tambay comes out on top in Budapest FIA ETCR 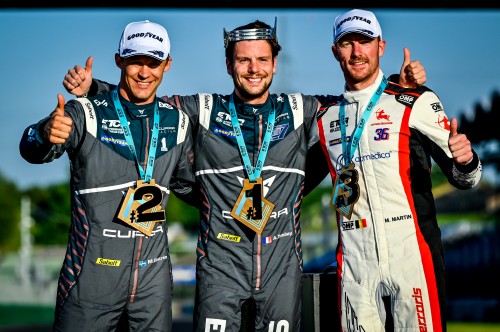 CUPRA EKS Adrien Tambay enjoyed a superb second round of the 2022 FIA ETCR eTouring Car World Cup for Race HU at the Hungaroring moving to the top of the Drivers’ Classification.

The heat was on in Budapest today for the FIA ETCR DHL Super Finals, with temperatures soaring and eTouring cars racing in equal measure. Tambay sped towards the coveted King of the Weekend title following a brilliant weekend in which he won the Pool FURIOUS DHL Super Final. 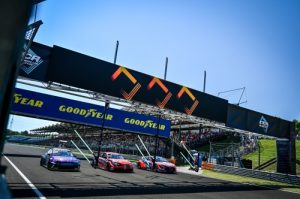 Pool FAST were first to race in the DHL Super Final, and it was a doubly super start from the Romeo Ferraris with both Maxime Martin and Giovanni Venturini storming into the lead from the gate-go. CUPRA EKS’ Mattias Ekström fought hard to split the two red cars, which he did using Power Up to pass Venturini on the second of the 5-lap race.

CUPRA EKS team-mate Jordi Gené had a trickier time; the Spaniard suffered from a double puncture after a tussle with Hyundai Motorsport N’s Mikel Azcona but was able to finish the race after pitting for new tyres, albeit in last place. Azcona took fourth, while team-mate Kevin Ceccon secured fifth. 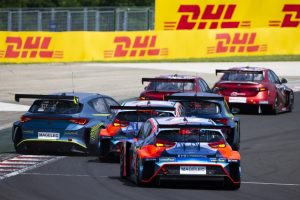 Pool FURIOUS took to the track in the late afternoon glow for the second and final DHL Super Final, which saw CUPRA EKS Adrien Tambay determined to take the lead from poleman Bruno Spengler (Romeo Ferraris), doing so successfully into Turn 2. Tambay never lost the lead, while the rest of the field delivered an action-packed race. 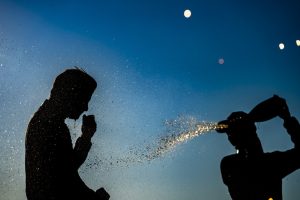 With Tambay now at the top of the Drivers’ Classification on 182, Ekström moves into second place, just two points down from the lead, with Azcona third on 139 points.

Quotes of the Day

Mattias Ekström #1
Things started off pretty bad with a bad start, so I lost a little bit of position there but Mikel had a worse start than me. After this it was a battle with Giovanni and I managed to pass him, and tried to catch up the leader but I wasted too much power up to get there. In the end, you have to be happy with second place after this. For sure we had better pace than to finish where we did. But then again if you have two bad starts in the weekend, you have to be happy with 80 points.

Jordi Gené #28
I had a very good start, I managed to get some positions, then I just covered Mattias’ back because it was getting close towards him. But I think Mikel Azcona got very frustrated and a bit desperate to gain back the position. We touched five times in three corners and unfortunately this came to a puncture on two of my tyres and I had to lose one lap to replace them. After that the rhythm was really good again so ups and downs, happy for the team, happy for the work done but not happy for my personal result.

Adrien Tambay #27
Amazing Final. I had to make ground for my mistakes from yesterday and this morning’s starts. I put pressure on myself because I needed to reward the team with a good result. I knew the car was really quick around here and I had to have a trouble-free race. I had to overtake Bruno quite strongly and it happened after two corners and that was the best plan, the plan A, which worked. I’m pretty happy, now we need to keep our head down and work for the home race of CUPRA, next week.

Tom Blomqvist #10
My final was good, ultimately the best result I could have got with second place. Happy with that and very happy with the team because Adrien managed to get the win and overall Mattias finishing second. Huge result for the team and for the manufacturers’ championship which is obviously very important. For me personally, with yesterday not finishing the race cost my weekend a lot. Otherwise, it could have been potentially another 1-2-3, but we live and learn. Eyes forward for the next race because the car is very good and we should be able to aim for another strong result there.

Luca Filippi #25
My Final was over as soon as contact happened. I was saving Power Ups, I don’t know where I could have finished but somewhere around Bruno and I think we could have been in the battle with Tom. I had to face another avoidable incident with Vernay unfortunately, which is really frustrating in my opinion, costing points both me and him.

Maxime Martin #36
Awesome to win the final, after a bad qualifying at the beginning of the weekend we came back every time until winning the final. I’m very happy for the team. The work they did, as we had some technical issues out of our control, has been paid off. That’s a victory for the team.

Giovanni Venturini #21
Good points for the team, for the championship and for me too. We did a mega start, it was a good fight with Ekström. P1 and P3 for the team in the final is good so looking forward to Jarama in less than one week.

Bruno Spengler #7
It was a good fight in the end. The CUPRA has more pace. It was a good battle with Tom, but I think Adrien was a little bit quicker and I tried to fight as much as I could. In the end it’s P3, which is good as well for the rest of the championship. We won two battles, scored points for the whole weekend, did good qualy as well a good improvement from Pau to here, so hopefully we can take the momentum and I’m very thankful for the work of the team the whole weekend.

Mikel Azcona #96
The Super Final was difficult, I struggled much more than expected. Coming from a very good semi final, the expectations were quite high but the track conditions changed a lot – it was super hot – and we struggled. I had wheelspin on the start, and from that point I lost positions. I tried to recover but I couldn’t do more than I did in the end. P4 is not what we expected but we just have to continue our upward trend and score lots of points for the title fights.

Norbert Michelisz #5
The Super Final was probably my best session of the weekend. I tried to be a bit strategic with sparing a lot of Power Up to be able to push. In the end, as soon as I started to put the pressure on the car in front there was an accident so from that point, I tried to close the gap to the cars in front fighting for P3 but they were a bit too far ahead. In the end, still a good result.

Jean-Karl Vernay #69
I made a good start, we had a lack of top-speed compared to the others so I was using a bit more Power Up already in the first lap. There were some good fights, I was able to recover from Blomqvist and fight with Spengler. Suddenly after two laps we had a lack of speed and the other cars were able to come back and overtake me. I tried to fight but as soon as I touched him, I broke the rim and I spun, and that was the end of our race. It’s not an ideal end to our weekend or for the title, but overall the performance has improved a lot compared to last year. Let’s keep working on it.

Kevin Ceccon #31
In the Super Final my goal was to help Mikel as much as possible. His start was not mega, so I ended up just behind him and giving him support by covering off Jordi Gene. I think our pace was good so I can’t complain about it. Overall our Qualifying was good but we struggled in the races, so we need to consider this moving forward. It’s been a great weekend, I showed my pace and I felt comfortable.