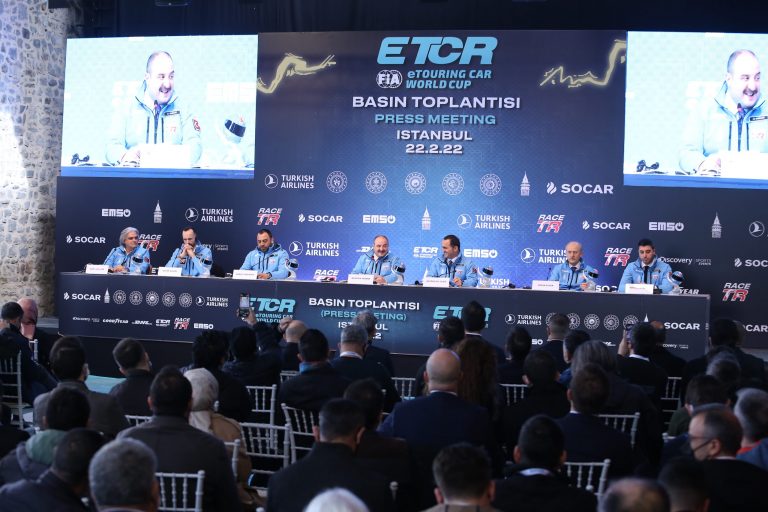 Turkey will host the FIA ETCR – eTouring Car World Cup for the next three years after an exciting multi-season plan that organisers say will ‘blaze a trail for the enhancement of electric mobility in the country’ was unveiled today in Istanbul.

The news, which guarantees the presence of the world’s top touring car drivers until 2024, was announced at a launch event at the Golden Horn Shipyard in Beyoğlu – Istanbul’s centre of culture – on Tuesday morning, hosted by the Beyoğlu municipality.

The move ensures that a round of the word’s first FIA-sanctioned all-electric touring car contest will take place in Turkey at a time of vast electrification of the automotive industry.

A 150 per cent rise in the number of electrified vehicles sold last year compared to 2020 and plans to export more than 1million Turkish-built electrified vehicles to other markets by 2030 are vivid indicators of the country’s desire to ‘go electric’ and reduce emissions.

This year’s Race of Turkey will be held on May 20-22 at the permanent Istanbul Park circuit; the venue for the annual Turkish Formula 1 Grand Prix.

It will then switch to an all-new street circuit, located in Beyoğlu, for both the 2023 and ’24 editions, as part of a festival highlighting the limitless possibilities of electric mobility in the city.

The first FIA ETCR – eTouring Car World Cup, which has evolved from 2021’s PURE ETCR, will begin with the Race of France on the legendary Pau street circuit, France, on May 6-8 before heading to Istanbul and then five further rounds in Europe and Asia over the following six months.

Eren Üçlertoprağı, TOSFED President, said: “As the Turkish Automobile Sports Federation, we are very happy and excited to host the FIA ETCR eTouring Car World Cup, in which electric cars – the future of the automotive world – compete. Thanks to this race series, which draws attention with its technology and its new concept, we will have the chance to show the beauty of Beyoğlu and Istanbul to the whole world, and to raise awareness about electric cars in a way that will also concern the TOGG [Turkey’s automobile joint-venture group] project, the pride of our country. We hope that we can see TOGG participate in this and similar races in the future. In this context, as in all international race organisations, we continue our efforts to organise this race in a way worthy of our country.”

Xavier Gavory, FIA ETCR Series Director, said: “Istanbul is one of the most fascinating cities in the world, blending its history as the centre of many world cultures with modern dynamism and permanent transformation. As Discovery Sports Events [promoter of FIA ETCR], we are pleased to organise the FIA ETCR eTouring Car World Cup; the groundbreaking 100 per cent electric series that will promote electric mobility in the heart of this vibrant city as a symbol of innovation and sustainability. It is our intention to help Istanbul demonstrate the mindblowing power and spectacle of today’s electric cars in the amazing environment that Istanbul will provide over the next three years.”

Mert Güçlüer, CEO of EMSO Sportif, the event promoter, said: “We are happy to host a special event in a special city like Istanbul, one of the world’s favourite cities where the continents meet. Turkey, as one of the key automotive production bases in Europe with the brands it produces and its young population, will be one of the countries where FIA ETCR will be followed with enthusiasm. As EMSO Sportif, we are proud to be able to bring environmentally friendly and valuable electric car racing to Turkey. We will blaze a trail in Turkey by carrying the excitement of our organisation, which will be run in Istanbul Park in 2022, to the streets of Beyoğlu next year.”