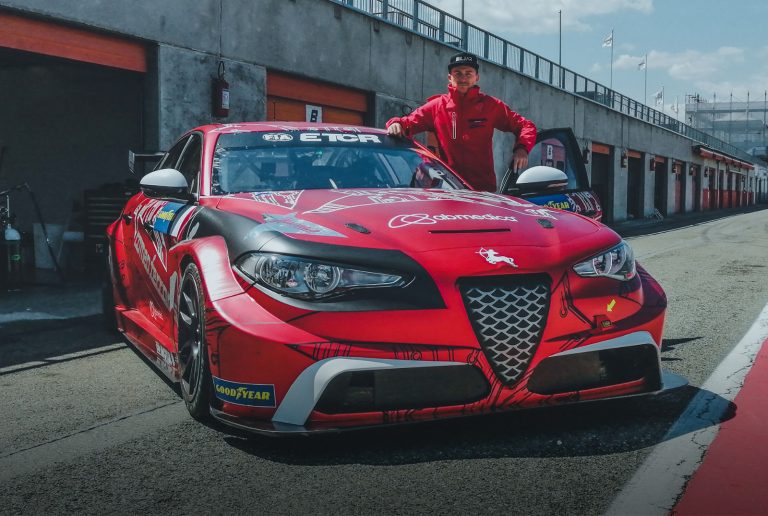 Romeo Ferraris has completed its line-up for the 2022 season of the FIA ​​ETCR eTouring Car World Cup with the announcement of Italian driver, Giovanni Venturini.

Thirty-year-old Venturini, from Creazzo, near Vicenza, will join the already-announced squad of Luca Filippi,  Maxime Martin and Bruno Spengler driving the Giulia ETCR for the Opera-based manufacturer.

“This year a new chapter in my career opens and I was immediately thrilled by the opportunity to race with Romeo Ferraris in the FIA ​​ETCR championship,” said Venturini.

“It is a project with ample room for growth and very fascinating, even more so because it will allow me to discover first-hand the strengths of electric propulsion in motorsport.”

For Venturini, the entry into the FIA ​​ETCR marks the beginning of a new professional adventure, after eight seasons in GT competition that has seen him claiming the 2017 overall title in the International GT Open. He was also a protagonist in the Italian series, and in the European and American GT World Challenge.

“I know I have a lot to learn, but I expect to be competitive at the wheel of the Giulia ETCR already in Pau, a track where I have always wanted to measure myself, he said. “This opportunity has arrived.”

Giovanni’s rich curriculum includes excellent results in single-seaters at the beginning of his career, with successes collected between 2008 and 2013 in Formula 2000 Light, Formula Renault 2.0, Auto GP and in the GP3 Series part of the ticket supporting Formula 1 Grand Prix.

“I am delighted with the line-up we have put together for this edition of the FIA ​​ETCR,” said Romero Ferraris Team Principal, Michela Cerruti.

“Giovanni is another driver of great value who has chosen to race with us after Luca, Maxime and Bruno: thanks to this quartet we can count on talent, speed, experience and their ability to work in highly structured organizations, contributing to the technical development of the car.

“These are precious assets, which will allow us to grow further as a team as well as a manufacturer and to make the Giulia ETCR even more competitive. To have drivers of this calibre on board our project gives us an additional dose of enthusiasm for the start of the season in Pau.”