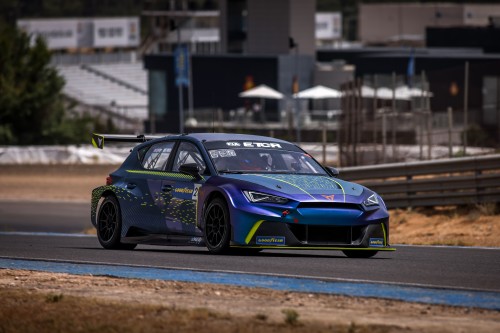 In Pool FAST Quarter Final 1 Gené got a good start, but Romeo Ferraris’ Bruno Spengler was better ,albeit unable to take the lead into turn one, and Gené’s team-mate Adrian Tambay took the initiative and Spengler at the next turn. Tambay tackled his experienced team-mate whilst Spengler lay in wait around the sinuous and snaking circuit, but Jordi couldn’t be jostled out of the lead despite Adrien’s advances.

The final laps were toughest for Gené as Tambay tried and tried to pass; to the inside, to the outside, but time and again Gené would gain or maintain the advantage in the bumper battle, where Spengler could only spectate. Gené was exstatic across the line for his first win of the season. 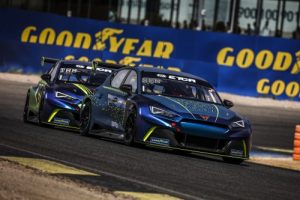 In the second Pool FAST Quarter Final, Hyundai Motorsport N’s Norbert Michelisz was put under pressure from Romeo Ferraris’ Luca Filippi down into turn one, but just as Spengler discovered, it’s a tough call around the outside there and Michelisz maintained station. Luca’s attentions soon changed to Jean-Karl Vernay behind him, and then beside him as the Hyundai Motorsport N man displayed customary feistiness in his pursuit of glory.

J-K passed Filippi to take up chase of his team-mate, but a moment later, Filippi was back in a flash and past J-K to take the fight to Michelisz. The leader had Power-Ups aplenty to keep his foes at bay but nevertheless, Filippi kept pushing.  A few lock-ups from the Italian were a possible warning of troubles to come from the Romeo Ferraries driver as he had a big moment on the penultimate lap with a 360 degree spin, unseating his rear-left tyre in the process, deflating driver, team and points potential from the heat. The Hyundai Motorsport N mates then cruised to their 1-2 finish; Michelisz-Vernay. 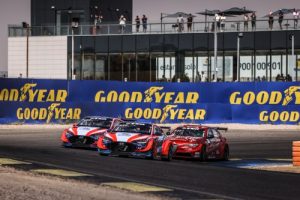 I’m so happy to have my first real win, so it’s been an amazing Saturday, full of emotions and I’m very happy because I needed to get some good results for myself and for the team. I’m so happy for everything and happy with Adrien that even though he was faster than me at the end, he respected me a lot. So I just have to say that that I’m I’m very pleased.

Well, it was a good Quarter Final. I had a little bit of a messy start, and then I could manage to pass Spengler again. Then I was quicker than Jordi, but I didn’t want to take any risks so that was a bit tough at times. Let’s see now with the Semi Final and the Super Final.

I think in the race we were maybe slightly closer than we were in qualifying. Although we could see I could see that the CUPRAs had a pace advantage on me, I tried my best to deal with the Power Up to keep some for the end, as I could see that they had more pace generally over the race. I think we have to analyze a little bit what we can improve, to get a little bit closer again. Until then, the team has done really a really good job to improve the car and give us a good car for qualy. Now I just gave my best try to score the points try to finish in the best place  in this race. It frustrated me they had a bit too much pace for me. Next we’re starting P1 in Semi Final 2 tomorrow and we’ll try to maximize the points over Sunday.

It’s a very nice feeling. I really tried to do my best, to have a good start which was there. I saw that Luca in the middle was doing his best to use Power Up to overtake by the first corner so I needed to do the same. I tried to force the braking, we were side by side but the car was fortunately wide enough until the exit turn 4! From that moment I felt confident because the car felt good – some small balance issues but I was confident enough to push and build a small gap which was a nice feeling. The target for the Semi Finals is the same: if we do a good start everything is possible. Starting from the outside probably is the least favourable position but with a good start and a good strategy I think it is possible to overtake.

As soon as I overtook Filippi on the first lap I tried to build a gap but the problem is there are a lot of marbles on the track so my tyres got dirty, so I tried to save my Power Up after Filippi got past me to use later on in the race. At least we can see some improvements compared to this morning. I think the Semi Final is going to be even more exciting.

The Quarter Final was a good fight. The first and second corner I was trying to get to be P1, but that didn’t really go to plan. Then I shuffled to P3  and then back to P2. I think I had a good base and good strategy to try and fight for the win but then we are the puncture on the on the rear left tyre. We still have to understand exactly what happened. I It’s a shame; it’s a bummer. We have to do our best in the in the Semi Finals.