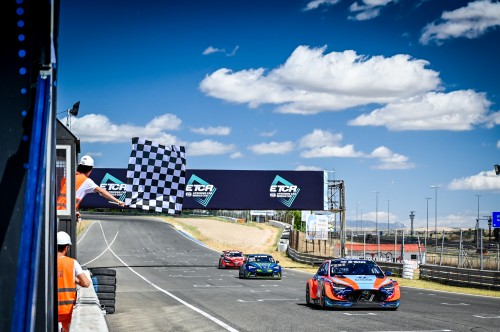 In warm but windy conditions for the first FURIOUS Semi Final, Ekström unusually made a good start off the line and deployed plenty of Power Up down to turn one, with Hyundai Motorsport N’s Mikel Azcona in hot pursuit. Romeo Ferraris Maxime Martin meanwhile clearly was opting for Power Up austerity in the early stages to bid his time for a later lunge.

Ekström held the power button on a little longer than Azcona, and it was a clean progression through T1, Ekström-Azcona-Martin, with Martin dropping away from the lead two as the lap progressed. Lap one saw Azcona keep pushing, but Ekström had sufficient safety margin from his former team-mate to not feel the squeeze and keep just out of reach.  Lap two played out in similar fashion, the third lap too, but there was action afoot for Martin. Seemingly previously is in a race by himself, saving his Power Ups, late on lap 3 he managed to take just a little too much exit kerb on a fast, flowing left-hander and a trip through the gravel left him evern further adrift of those ahead, his strategy ruined.

For the final lap, Ekström had been able to break from his pursuer and he crossed the line over 1.7secs to the good from Azcona with Martin boosting his way to just 0.8secs from Azcona depsite his brief off-road career.

In the second FURIOUS Semi Final Nicky Catsburg proved victorious in his FIA ETCR debut for Hyundai Motorsport N coming from the outside P3 position on the grid to emerge from the second turn in the lead. Pole-man Tom Blomqvist (CUPRA EKS) and Romeo Ferraris’ Giovanni Venturini both lost out at this start, with Blomqvist robustly defending from Venturini through T1 but unable to do anything to defend from Catburg’s shrewd positioning and Power Up use.

After the frenzy of the first corners, it was then a more measured play from all three FURIOUS drivers, with Blomqvist on a determined watching brief behind Catsburg. The start of lap three looked to be the Swede’s best opportunity with an attempt at the outside of turn one, but Catsburg was wise to this play and defended cleanly and sufficiently. Behind the dicing duo, Venturini was pushing whilst saving Power Ups like his team-mate Martin in the earlier heat, but if not as dramatically as the Belgian, the Italian did kick up a bit of dust as he tried to keep in touch.

For the final lap, Blomqvist kept close but ultimately for no cigar as Catsburg cruised to his first FIA ETCR win on his debut weekend and Venturini finished just four tenths off Blomqvist in second.

Happy with maximum points, great rhymth all race and the car is behaving amazing all weekend. Now we have to finish off with a good Super Final

The Semi Final was positive, we took P2, which was important points for the championship and staying third in the standings. It was easy at turn one to keep second place, I saw already that Martin wanted to do a different strategy so I tried to save Power Up too. On the first lap I tried to put Mattias on to the limit but he was strong and I wasn’t able to put my car in front of him. At this point I knew it was going to be difficult so I tried to keep the car on the track and keep second place. I had to focus on the last laps as Martin had much more Power Up than me and I tried to not make any mistakes and finish with no dramas.

It looks like we are missing a bit of pace in general. But yeah, at the end I tried to do my best try to have a different strategy, but didn’t pay off but at the end. We still have the Super Final to go and try to improve and be better.

Super nice Semi Final! Everything I learned and did wrong yesterday went right today. It’s a steep learning curve but honestly it was really nice, trying to manage the power and understand how to do this best. I felt I had a better collaboration today with the team and the way I communicated with my engineer so I could see in the mirror what Tom was doing and anticipate. It was nice to win, a really good feeling. I was a little bit lucky because I had a good start but as they had the inside line, I decided to use less Power Up as they would have been ahead of me in turn one. It was better to save it and then try to pass them on the exit – which is actually what I did.

Not the best result, now the objective is to help the team as much as I can in the Super Final.

So we did Semi Final 2 and tough for us because maybe with the colder temperatures we are struggling a little bit with the grip level, but at the end, good effort by the guys so I’m happy for this and we’re looking forward for the Super Final.