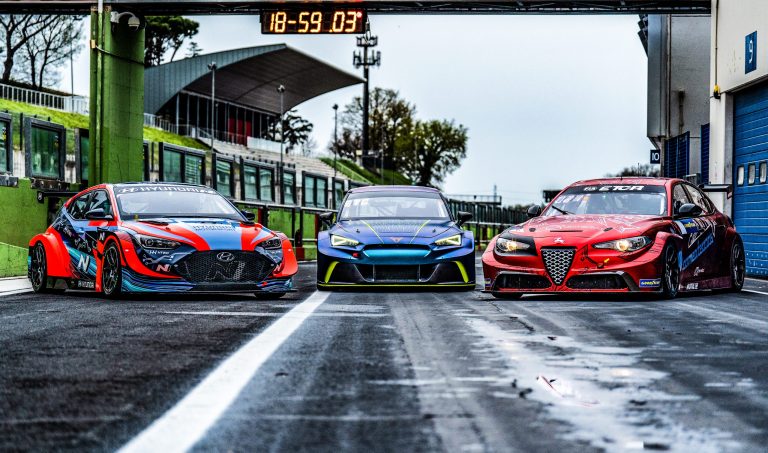 The three manufacturers from the world’s first all-electric touring car series in its initial iteration as PURE ETCR will all return, with CUPRA EKS, Hyundai Motorsport N and Romeo Ferraris all featuring driver line-ups of both familiar faces and new stars.

2021 title winners CUPRA Racing has formed a partnership with the ultra-successful EKS team, owned by Mattias Ekström with the Swede eager to win again in 2022 with the team now racing as CUPRA EKS with the CUPRA e-Racer.

For Hyundai Motorsport. five drivers, including touring car heavyweight Jean-Karl Vernay, will race the Hyundai Veloster N ETCR. Le Mans class winning Frenchman Vernay finished as runner-up in 2021 and will be joined by Spaniard Mikel Azcona, who finished just one point behind him and moves over from CUPRA.

Belgian Maxime has Le Mans and DTM wins on his CV whilst Canadian Spengler is the 2012 DTM champion. Italian Venturini won the 2017 International GT Open.

FIA ETCR is the world’s first all-electric touring car series with a World title at stake. Manufacturers compete against each other using the most powerful touring cars ever built; the maximum 500kW (670bhp) beasts battling it out on a combination of iconic race tracks and street circuits through numerous short, sharp Battle races for the ultimate prize.

Track action gets underway on the streets of Pau this weekend with practice on Friday; Qualifying and Quarter Finals on Saturday; then Semi Finals before the DHL Super Finals on Sunday.

“The announcement of the inaugural FIA ETCR eTouring Car World Cup entry list is something many have been looking forward to and we surely can’t be disappointed. Between the three manufacturers we have a line-up of proven professionals with an impressive track record in touring car and sportscar racing who will make the FIA ETCR one of the strongest touring car series out there. It will be interesting to see how all these talented drivers will cope with the unique demands of ETCR machinery. The entry promises fierce competition and gives us plenty to look forward to this season.”

“One of our big stories for 2022 is the strength and depth of our driver line-up for our first season as the FIA ETCR eTouring Car World Cup. CUPRA EKS, Hyundai Motorsport and Romeo Ferraris will all field drivers of exceptional talent and there are sure to be fireworks on track. When you look at each squad you say wow! Each and every driver in the series has the potential to come out in front and we expect some monumental Battles. This weekend we start our season on the streets of Pau where the spectacle provided by these incredible teams and drivers is sure to delight and also enhance awareness of FIA ETCR and electric motorsport on a global scale.”

*Drivers #31 and #88 will share an entry across the season, competing in different events. Exact schedule to be confirmed by the entry list of each individual round.